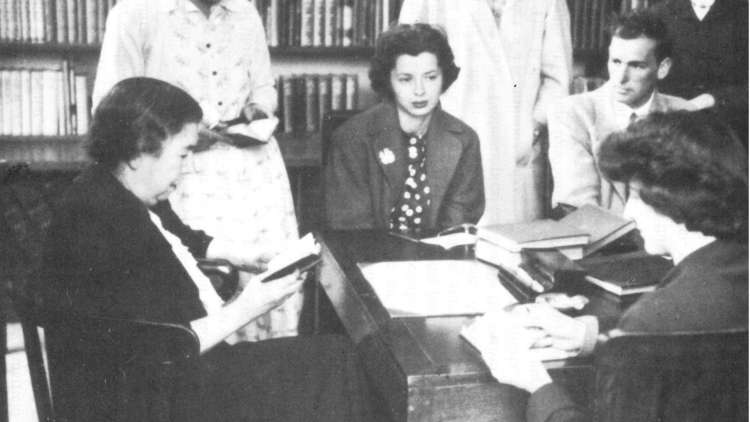 London’s women historians: a celebration and a conversation

On 13 March 2017, a group of historians from King’s College London collaborated with the IHR to hold an event called ‘London’s women historians: a celebration and a conversation’. The event was held, in part, to launch a ‘pop-up’ exhibition of portraits of women historians (now a permanent fixture) to line the walls of the IHR staircase.

Creating this exhibition was the original motivation behind the event. We had long found the existing portraits of (all male) IHR Directors since 1921 lining the IHR staircase disconcerting, and had often talked about this with colleagues and friends as we climbed the stairs to use the library or attend a seminar. Intentionally or not, they seemed to tell a ‘great men’ story about the historical profession that nobody really believes anymore. But their presence of course reinforced that story in this version of the IHR’s self-presentation.

We decided very early on to crowd-source potential female names for inclusion in an alternative set of portraits. This led to an active Twitter conversation and countless generous email exchanges, greatly facilitated by the IHR’s own Women’s History Seminar mailing list. This activity generated a two hundred-strong list of candidates. Talking to colleagues at King’s at our regular women’s lunches, we eventually developed the criteria of women working in the ‘intellectual space’ of London and the IHR, across the same time period covered by the Directors. The intention here was not in any way to confine or reduce the whole story of women in the historical profession down to London - as this would of course be completely misleading. However, we did need to give this exhibition a focus and an internal coherence, and it seemed to make sense to focus on this important site (and space) for women’s research and activity as a first step.

Using these criteria we selected 20 names for inclusion, arriving early on the day of the event to affix their portraits to the walls ready for the launch. The exhibition aimed to insert gender into the story of the history profession in London, looking beyond institutions (and, sometimes, the academy) and retelling the narrative visually. This meant that it needed to be messier and more uneven than the permanent portraits. Moreover, it is really purposeful that our portraits were printed and affixed in a way that is much more transient (and sometimes more ‘domestic’) than the formal male portraits. This represents the often precarious position of women historians in 20th-century London institutions. Many of the images we have chosen are active and ‘lived’, many of them are joyful. This is no accident.

The event on 13 March 2017 had four panel sessions, first featuring papers discussing women historians in the past, and eventually moving on to debates regarding gender in the profession in the present. It culminated with a drinks reception and the ‘launch’ of the portraits exhibition.

The event was completely sold out, and the live and engaged atmosphere deepened our conviction that connecting a ‘celebration’ of women historians in the past with a ‘conversation’ about issues facing women historians in the present was essential. One of the highlights was the fact that the event served to connect-up historians working across a range of sub-disciplines (for example, economic history and intellectual history), each with their own peculiar past trajectories and present challenges, into a broader retrospective and objectives for the future.