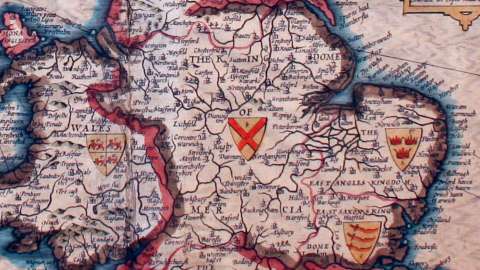 The Midlands Identities Project considers the ways in which the geographical Midlands region of the UK has been configured as a ‘non-space’ between the more clearly-defined North and the South. This digital, publicly-accessible project represents an interdisciplinary collaboration between artists, creatives, and academics from across multiple sectors and institutions. By challenging the UK’s traditional North-South binary, we aim to recover and highlight the unique and overlooked history of the Midlands as well as to consider the evolving nature of the region's contemporary identities.

The event is being hosted by the Midlands Historical Review (MHR), a peer-reviewed open-source journal funded by and hosted within the University of Nottingham.

The so-called 'North-South' divide remains the dominant social, economic, and cultural framework for understanding England's internal geopolitics. But there is a land between these two extremes. Over ten million people live in the region of England known as the Midlands. This region has produced titans of English literature including William Shakespeare, D. H. Lawrence, and J. R. R. Tolkien. During the Industrial Revolution, intellectual and industrial pioneers from across the Midlands laid the foundations for industrial society as we know it today. During the post-war era, its urban centres became the foremost destination for new waves of migration, creating the diverse Britain we recognise today and giving rise to novel forms of populist and nativist politics that continue to define political discourse . Despite this central role in both national and international history, the region's unique significance remains largely unexplored, lost in the space between the North-South binary.

The Midlands Identities Project seeks to amend that. We are hosting a one-day conference that seeks to shed light on the marginalised history of the region. We are inviting scholars, writers, and artists from a variety of fields, as well as the general public, to join us to explore and celebrate the history of the Midlands’ formation as a cultural and intellectual space.

We seek to understand the role of the Midlands as a formative identity point in history as well as in the contemporary moment, to explore how the region was imagined in Britain’s intellectual and cultural politics, as well as its meaning and significance in a broader public discourse. We aim to directly engage with the sense of ‘non-placehood’ that pervades the region. In contrast to the monolithic regional identities that characterise other parts of the country, we seek to understand how the sense of negative space occupied by the Midlands has fostered a decentralised and highly localised plurality of regional identities that variously emphasise cultural hybridity, alienation, and provincialism.

Alongside a presentation of academic papers examining these themes, the conference will host virtual exhibitions, workshops, and performances by artists, musicians, and creatives from throughout the region. Through this blend of academic and creative involvement, we will not only be able to think critically about the untold regional history of the Midlands, but also support active engagement with that history amongst the Midlands’ modern-day communities by taking advantage of existing audiences and communications networks.