Dr Alexandra Steinlight is a historian of modern France, with particular interests in archives and institutions of memory, the state and bureaucracy, and the aftermath of war in the twentieth century. Her research project at the IHR is 'States of Preservation: Constructing France’s Occupation Archives'. 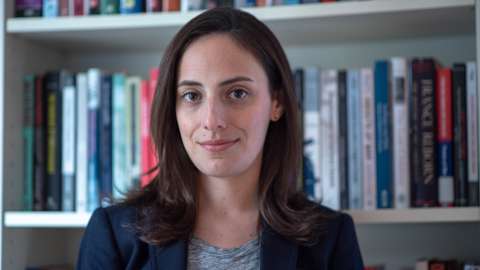 I am a historian of modern France, with particular interests in archives and institutions of memory, the state and bureaucracy, and the aftermath of war in the twentieth century. I received my PhD from New York University in September 2018.

While a Past & Present Fellow, I will complete my book manuscript, States of Preservation: Constructing France’s Occupation Archives. The work explores the construction of France’s wartime archives in the five decades after the country’s liberation from Nazi rule. This study follows a diverse group of professional archivists, historians, government officials, local notables, erudite amateurs, former resisters and deportees, and Jewish activists, who brought distinctive forms of expertise as well as personal experience to the task of creating a paper trail of the war years.

Building on more than three decades of scholarship on France’s tortuous reckoning with the legacies of the Occupation, 'States of Preservation' shifts our attention from the realm of collective memory to the material world of the archives. The book argues that the Second World War and its aftermath produced new forms of archival consciousness, by which I mean new ways of thinking about how to process, record, and transmit the past. Engaging with the interdisciplinary literature of the 'archival turn', I challenge the prevalent view among historians that archives and state authority are mutually and necessarily constitutive.

The state archive, I contend, has never been uniquely the business of the state. My work attempts to untie or at least to loosen the knot that binds these two institutions. The relationship between the archive and the state emerges in this account as inherently unstable, even—or perhaps especially—in the case of the administratively centralized French state.