Brianne Dolce is an historian and musicologist working on the medieval Southern Low Countries. Her work focuses on lay religiosity and religious nonconformity, the role of women in high medieval religious and cultural life, and the proliferation of vernacular literature and song in the city of Arras between the twelfth and thirteenth centuries. While a Past & Present Fellow, she is working on her book project, Alternate Orthodoxies: Religious Culture and the Vernacular Arts in Medieval Arras. 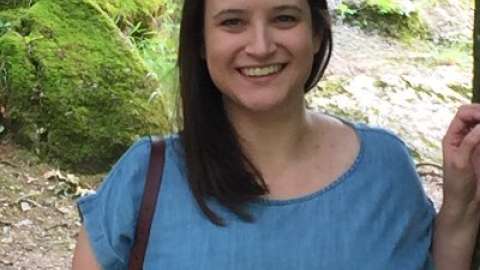 Brianne’s research focuses on the religious, cultural, and social history of the city of Arras during the medieval period. Her PhD, completed at Yale University in 2020, considered the famed Confraternity of Jongleurs and Bourgeois of Arras, a lay religious organization often connected with vernacular songs, plays, and other entertainments created in the city during the thirteenth century. In it, she argued that the category of trouvère, or a poet-composer who created works in the vernacular, was not adopted by contemporary poets, and that its modern usage is fundamentally androcentric and obscures a more complex understanding of how certain individuals became involved in cultural production.

The book project she is working on at the IHR, Alternate Orthodoxies, reveals links between heresy and religious nonconformity, broadly construed, and the nascent vernacular literary and musical culture of Arras in the late-twelfth and mid-thirteenth centuries. Sitting at the border between France and Flanders, Arras and its inhabitants embraced their in-betweenness to create and maintain a thriving financial, cultural, and social centre. Alternate Orthodoxies demonstrates how the extraordinary vernacular culture with which the city of Arras and its surrounding region are now synonymous was a direct result of decades of experimentation with religious nonconformity, ranging from explicit heresy to new movements in women’s personal piety.

Brianne’s first article, ‘“Soit hom u feme”: New Evidence for Women Musicians and the Search for the “Women Trouvères”’, appeared in the September 2020 issue of Revue de Musicologie. In it, she identifies a number of women musicians who lived and worked in Arras during the long thirteenth century, including civic, popular, and liturgical musicians, and argues that these women betray important connections between the city and the County of Flanders throughout the period.

Brianne holds degrees from the University of Michigan (BM 2013), King’s College London (MMus 2014), and Yale University, where she received an MPhil in Medieval Studies and a PhD in Music History in 2020. From 2018 to 2020, she was a visiting fellow at the History Department and Pirenne Institute of Medieval Studies at Ghent University, the first year of which was funded by the Belgian American Educational Foundation.