Past and Present Fellow: Race, Ethnicity, and Equality in History

Educated at Jadavpur University, Kolkata, India, University of Cambridge and King's College London, Dr Diya Gupta is a literary and cultural historian interested in the intersections between life-writing, visual culture and literature, particularly in response to war. 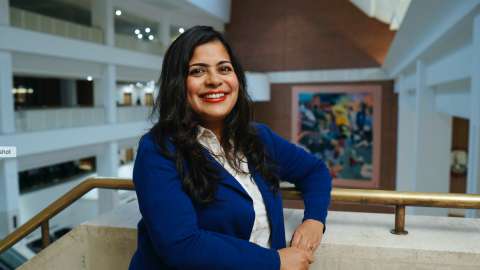 At the IHR, Diya is working on her first book, based on her recently concluded doctoral research (2015–2019) at the Department of English, King's, where she studied Indian experiences and literature of the Second World War.

Two-and-a-half million men from undivided India served the British during this war.  Their experiences are little remembered today, neither in the West where a Euro/US-centric memory of the war dominates, nor in South Asia, which privileges nationalist histories of independence from the British Empire.  What was it like fighting for the British at a time when the struggle for India’s freedom from British rule was at its most incendiary?

Diya’s book places Indian emotions at the heart of the Second World War. Alongside colonial photographs, she analyses letters, memoirs, political philosophy and literary texts in English and Indian languages to reveal the intensity and influence of these Indian war emotions.

She is also developing her next project at the IHR on hunger, violence and empathy, which will investigate literary and visual representations of hunger in colonised India, focusing on the man-made Bengal Famine of 1943 with its three million victims.

Along with writing feature pieces on her research, Diya has been interviewed on two Channel Five documentaries and BBC Asian Network. She regularly gives public talks on her research – at the British Library, Imperial War Museums, British Federation of Women Graduates, New Art Exchange gallery in Nottingham and Presidency University, Kolkata, India.

‘Why remembrance of Indian soldiers who fought for the British in World War II is so political’, opinion piece for Remembrance Sunday for The Conversation.

‘Christopher Nolan's Dunkirk and the Cultural Memory of a Global War’, feature piece for CNN News 18

‘Bengal boys of the “good war”’, cover story for the Sunday supplement of The Telegraph, India

Four posts on Indian soldiers’ letters for the British Library:

‘“Pierce your heart”: Letters from Europe and North Africa by Indian prisoners in the Second World War’

‘“We become crazy as lunatics”: Responding to the Bengal famine in Indian letters from the Second World War’

‘The “Kashmir of Europe” and other exoticisms: Indian soldiers’ tales of travel in the Second World War’

‘Teaching literature in the age of Trump and Brexit: some reflections’     (with Sinéad Murphy)