Dr Janel Fontaine is a historian of early medieval Britain and Europe. Her research project while at the IHR considers 'Slave Trading and Change in Northern and Central Europe in the Early Middle Ages'. 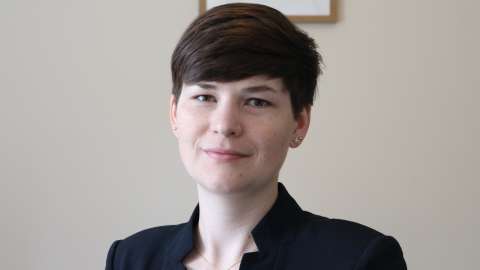 Janel Fontaine’s research focuses on early medieval slave trading practices in the British Isles and the Czech lands. Her PhD thesis, recently completed at King’s College London, examined changes in the scope and scale of slave trading from the seventh through the eleventh centuries, and the role of these practices in wider trade networks.

As a Past and Present fellow, Janel’s project draws from the empirical research of her PhD thesis in order to argue for the existence of an ‘early medieval model’ for slave trading in disparate regions, and to attempt to determine the extent to which said model represents a unique historical phenomenon. As part of her first monograph, this study addresses what the patterns of slave raiding and slave trading were and investigates the extent to which slaving shaped early medieval societies.

By framing an early medieval context within the broader narrative of global slavery, this study aims to situate an early medieval model alongside larger slaving systems in order to assess whether the patterns of slavery detected in large-scale slave societies are universal.  In doing so, this project will contribute not only to our understanding of medieval social hierarchies and economic networks, but to how slavery has functioned throughout history.

Janel also holds an MA in Medieval History from King’s College London, as well as a BA in History from the University of Florida with a Minor in Anthropology. Her broader areas of interest include early medieval networks of trade and exchange, migration, and the archaeology of transition periods.

‘The archaeology of slave trading in Viking-Age Britain and Ireland: a methodological approach’, in Felix Biermann and Marek Jankowiak, eds., The Archaeology of Medieval Slavery (Maney: Manchester, forthcoming).