Dr Kathryn Dyt is an environmental and cultural historian with a specialism in the history of Vietnam in the nineteenth and twentieth centuries. Her research project at the IHR explores, “The Vietnamese Weather-World: An Environmental History of the Nguyen Dynasty”. 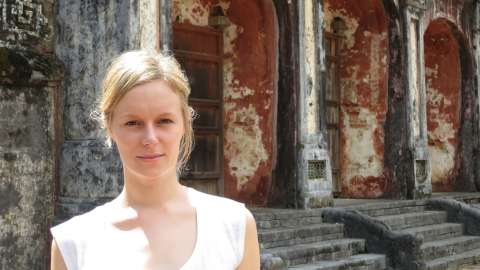 As a Past & Present fellow, Kathryn is completing a book manuscript, The Vietnamese Weather-World: An Environmental History of the Nguyen Dynasty. The manuscript  explores how the Vietnamese court in the nineteenth century organised itself in relation to the powerful, agentive and emotional ‘weather-world’ within which it was immersed.

Drawing on sources in Vietnamese, Chinese and French, it seeks to transform understandings of the Vietnamese past by approaching governance, royal authority and power at the Nguyen court from an ecological perspective. Ranging across topics such as the court’s documentation of astronomical and meteorological phenomena, divination practices, rainmaking rituals and the writing of imperial poetry, the study argues that Nguyen emperors consolidated their positions through displays of superior weather knowledge and emotional interaction with the natural world. The manuscript aims to make a contribution to understandings of pre-colonial Vietnam and the nature of statecraft more broadly.

Kathryn has conducted extensive historical research in Vietnam since 2004. Her PhD thesis, completed  at the Australian National University, was awarded the 2018 ASAA Prize for the Best Thesis in Asian Studies. She holds a research Masters degree in History and a BA (Hons) in History and Japanese from Monash University. Her masters thesis, titled Going Against the Stream: Buddhism, Gender and Marxism in the Narrative of a Vietnamese Nun, is an oral history of female monasticism in northern Vietnam during the twentieth century. She has broad research interests in the history of Asia, religion and ritual, history and memory, phenomenology and anthropology.