Dr Nicholas Matheou is a social historian specialising in the Middle East and Mediterranean in the Middle Ages. His research project while at the IHR is '“The Fate of Unjust Cities”: Global History, Political Economy & the Abandoned City of Ani, 900-1400'. 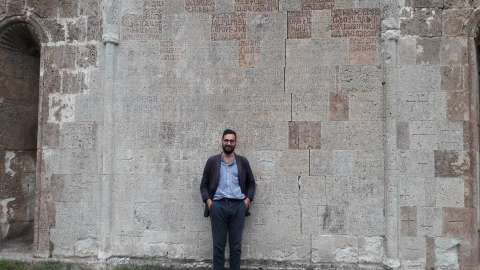 Nicholas S.M. Matheou is a social historian specialising in the medieval Middle East and Mediterranean, particularly Anatolia, Upper Mesopotamia and Caucasia (approximately modern-day Turkey, Armenia, Georgia and Azerbaijan, as well as parts of northern Syria and Iraq). His research particularly focuses on the empire of New Rome (“Byzantium”), the medieval Armenian and Georgian polities, and the city of Ani, between the ninth and fourteenth centuries. He also takes a comparative perspective across the region, especially from Kurdish and Ottoman studies, as well as globally, from pre-history to the modern day. Through this research Nicholas theorises social-historical themes of hegemony and counterpower, ethnicity and nationhood, and critical political economy before, during and after the rise of capitalism. He is aiming towards a radical perspective on social history from an anarchist - that is, a methodologically anti-state - standpoint.

Nicholas received his first degree in Ancient & Medieval History from the University of Edinburgh, before moving to the University of Oxford to complete first a master’s degree in Late Antique & Byzantine Studies, and then a doctoral dissertation in the Faculty of Oriental Studies titled ‘Situating the History attributed to Aristakes Lastiverc‘i: The Empire of New Rome & Caucasia in the Eleventh Century’. During his time as a postgraduate student he co-founded the international research network The Long History of Ethnicity & Nationhood at The Oxford Research Centre for the Humanities (TORCH), running a number of workshops, conferences and seminar series.

During his time at the IHR Nicholas will focus on developing his doctoral research into a monograph, and begin a new project writing a radical global history of the abandoned city of Ani in central South Caucasia, modern-day eastern Turkey, with particular focus on political economy. This global history will situate the city’s emergence, development and decline between the tenth and fourteenth centuries in macro regional and interregional transformations, particularly the Mediterranean Commercial Revolution and the emergent world-system generated by Mongol Eurasian hegemony, interconnected with micro analysis of developing social relations in the urban space and its environs. The project draws on Ani’s rich material remains, particularly the large corpus of monumental epigraphy, as well as numismatics, ceramics and architectural remains, supplemented by Armenian, Georgian, Greek and Islamic (Arabic & Persian) literary sources. Exploring and theorising the political economy of different state-systems, long durée histories of commercial capitalism, and subaltern resistance framed through the heuristics of hegemony and counterpower, the project touches on historical and social themes relevant across time and place.