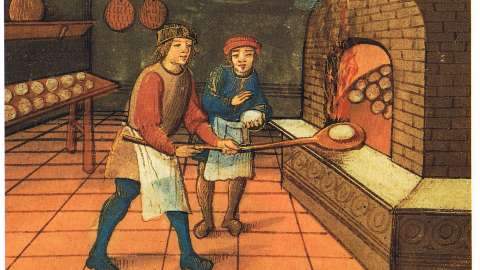 This podcast engages with recent historiographical discussions vis-a-vis the changing tastes and methods of bread baking through the central years of the Middle Ages. Although the process of milling was beginning to be mechanized from the later years of the 11th century, Debby Banham is eager to point out the persistence of the practice of grinding corn by hand – a very laborious process.

The popularity and prestige of white bread over barley bread at the time further exposed the inefficiencies of bread-milling, due to the very rigorous methods necessary to acquire the white flour for this bread. The apparently limited use of ovens in the early medieval baking process also proved that there will still many developments required relating to the rise and shape of bread in order for it to resemble that which is commonly eaten today.

Despite the wide variety of bread-baking methods and ingredients being used during the period, this paper still manages to convey the appearance of a typical loaf of the Middle Ages – essentially as resembling a baked potato! The podcast also discusses the nutritional, visual and cultural importance of bread during the period and reveals how food can offer a significant insight into many aspects of society.