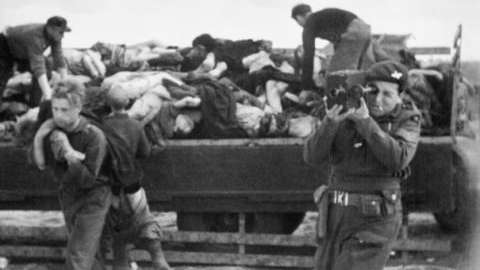 Event: Pears Institute for the Study of Antisemitism

For a long time, scholars have been convinced that films produced by the Allies documenting atrocities in the liberated concentration camps failed in their attempt to shame and re-educate Germans. The disappointment, expressed by contemporary critics and later scholars, over the lack of spontaneous confessions of guilt or responsibility among Germans polled after viewing these films is understandable. But what would have constituted a success? What kinds of viewer reactions could have been expected?

Starting with the premise that many Germans regarded the Allies­’ screenings of these atrocity films as acts of public shaming, Ulrike Weckel explains how the dichotomy of success or failure oversimplifies the historical situation and discusses some of the complexities involved in understanding the attitudes and actions of the shamed.

Ulrike Weckel is Professor of History in the Media and the Public at the Justus Liebig University Gießen in Germany, and is currently the Richard von Weizsäcker Visiting Fellow at St Antony’s College in Oxford. She is especially interested in the ways in which the Nazi past was handled and represented in postwar Germany. Her publications include Beschämende Bilder. Deutsche Reaktionen auf alliierte Dokumentarfilme über befreite Konzen­trationslager (Stuttgart 2012) and the recent essay, “Shamed by Nazi Crimes: The First Step towards Germans’ Reeducation or a Catalyst for their Wish to Forget?,” which appears in Reverberations of Nazi Violence in Germany and Beyond: Disturbing Pasts, edited by Mary Fulbrook and others (London/New York 2016).

Below you will find the introduction by Professor Jo Fox, IHR Director, the main lecture itself, and then questions from the audience.