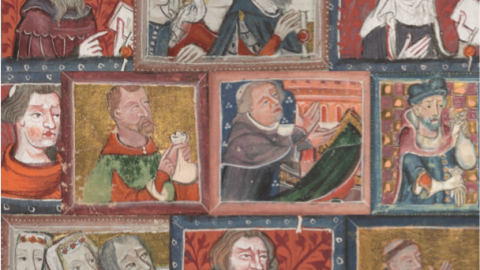 "All are fine pieces of scholarship, based on original research, which in many cases pick up and carry forward themes with which Caroline Barron has herself engaged … Medieval Londoners advances the study of the medieval capital at the same time as it acclaims the historian who has done most to bring it to life", Reviews in History (January 2020)

Edited by Elizabeth A. New and Christian Steer Medieval Londoners were a diverse group, some born in the city, and others drawn to the capital from across the realm and from overseas. For some, London became the sole focus of their lives, while others retained or developed networks and loyalties that spread far and wide. The rich evidence for the medieval city, including archaeological and documentary evidence, means that the study of London and its inhabitants remains a vibrant field. Medieval Londoners brings together archaeologists, historians, art-historians and literary scholars whose essays provide glimpses of medieval Londoners in all their variety.

This volume is offered to Caroline M. Barron, Emeritus Professor of the History of London at Royal Holloway, University of London, on the occasion of her 80th birthday. Her remarkable career – over some fifty years – has revitalized the way in which we consider London and its people. This volume is a tribute to her scholarship and her friendship and encouragement to others. It is thanks to Caroline M. Barron that the study of medieval London remains as vibrant today as it has ever been.

LIVING IN THE CITY

THE LURE OF LONDON

10. Charity and the city: London Bridge, c. 1176‒1275, John A. McEwan
11. John Reynewell and St. Botolph Billingsgate, Stephen Freeth and John Schofield
12. The testament of Joan FitzLewes: a source for the history of the abbey of Franciscan nuns without Aldgate, Julian Luxford
13. Souls of benefactors at Grey Friars church London, Christian Steer

Doctorates awarded under the supervision of Caroline M. Barron