A new VCH Essex project was launched in April 2021 to research the history of Harwich and Dovercourt in the 18th century. The project, supported by the Essex Heritage Trust and the VCH Essex Trust, is being conducted by Dr Andrew Senter, supported by the country editor, Dr Chris Thornton. 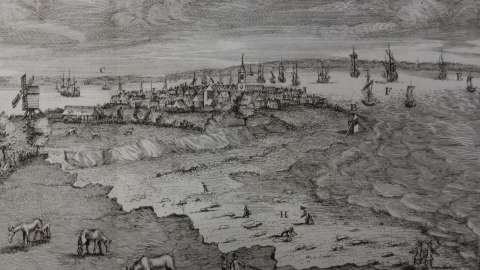 The project will investigate the role of Harwich as a port and small town that was strategically significant for the defence of the country.  Its significance grew during the French Revolutionary and Napoleonic Wars when barracks were established in Harwich to complement Landguard Fort. The packet station at Harwich was of national significance being one of the main routes to the Continent and the town also served as a base for HM Customs.

The most important industries in Harwich were sea-fishing and shipbuilding while Dovercourt was a predominantly agricultural community. The social life of Harwich was centred on the numerous inns, particularly the Three Cups, as well as the church and freemason communities. Harwich was a treasury borough which sent two members to parliament.

Research has started on documentary sources in the Essex Record Office (Chelmsford), The British Library, The National Archives (Kew) and in local collections in Harwich.

The VCH is especially grateful to The Harwich Society and Harwich Town Council who have both offered to provide access to their collections and working space, and help to promote the VCH project locally.

Work has already been partly completed on other parts of Volume XIII including the Medieval, Tudor periods and the 19th century. A version of the latter chapter, also supported by the Essex Heritage Trust, has already been published as a VCH Short: Harwich, Dovercourt and Parkeston in the 19th Century.

The project has been generously supported by the Essex Heritage Trust and the VCH Essex Trust. It is a two-year project, but currently funding has only been secured for the first year. If you are able to contribute to the continuation of the project, or have ideas for fundraising, please contact the VCH Essex Trust via Patricia Herrmann (the Trust’s Hon. Secretary by email) or Chris Thornton (VCH Essex county editor by email).