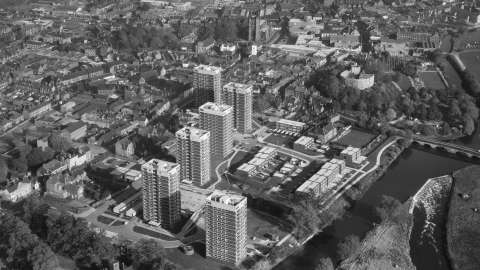 Authoritative and comprehensive history of the town of Tamworth and its environs, edited by Nigel J. Tringham

VCH Staffordshire XII, Tamworth and Drayton Bassett is available to buy from Boydell & Brewer. Until 31 July we are offering a 25% discount To obtain this discount, enter the code BB913 at the checkout.

In the centre of a parish with several townships, Tamworth was important for the rulers of pre-Viking Mercia and became a burh in 913 under Æthelflæd, "lady of the Mercians", who may also have installed relics of St Edith in the church there. Although a castle was built after the Norman Conquest, its lords did not control the town, which became a corporation under Elizabeth I and is now the head of a district council. Throughout its history Tamworth has functioned as a market centre, with some cloth-working and paper-making, although cotton mills, opened by the nineteenth-century Prime Minister Robert Peel, just outside the town in the 1790s were soon moved to a canal junction to the south in Fazeley, where tape-making survived (as also in the town) until the late twentieth century.

Deposits of coal and clay exploited from the nineteenth century resulted in mining villages at Glascote and Wilnecote inthe eastern half of the parish, which lay in Warwickshire, as did half the town until transferred to Staffordshire in 1890. The Warwickshire part of the parish was added in 1965 in connection with the decision to take in a Birmingham overspill population, which together with private developments created vast housing estates, the population of "greater Tamworth" more than doubling by the early 21st century. The volume also includes the adjoining parish of Drayton Bassett, which had close links with the town and where Peel built a mansion house, demolished in the earlier 20th century: its site is now part of a major amusement park.