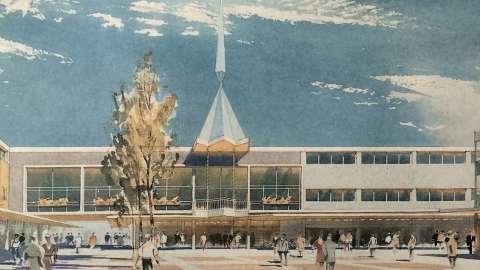 The Victoria History of Gloucestershire

Yate is a town in South Gloucestershire, north-east of Bristol. Its ancient parish extended across a largely flat vale, which until the 13th century lay within Horwood forest, and was then cleared, inclosed and farmed as rich pasture by the tenants of the influential owners of its three manors. A limestone ridge fringing the vale provided good building stone, and across the parish seams of coal and a rare mineral - celestine - have been exploited until recent times. Yate lay on an important early route between Bristol and Oxford, and its mineral wealth attracted early railway links, so that it was well placed for industrial development. Bristol-based industries moved there during the decades after 1900, including wartime aviation production, so that Yate's population and housing began to increase.

During the 1950s a 'new town' plan was devised which carefully controlled Yate's expansion, and included pioneering housing estate design, diverse industrial development and a large and progressive shopping mall. Yate's boundaries were redrawn in 1988, and the population of this vibrant, modern town now exceeds 20,000.

Published in 2015 as part of the VCH Shorts series