The course is designed to help students to work with medieval and early modern manuscripts. It will be tailored as far as possible to individual needs within the group. Besides practical training (transcription, editing, the physical aspects of manuscripts and documents including illumination), the course introduces the history of script and its intellectual context from Roman times to c.1650. In the second term English documents and manuscripts will be studied.

Book a place on this course 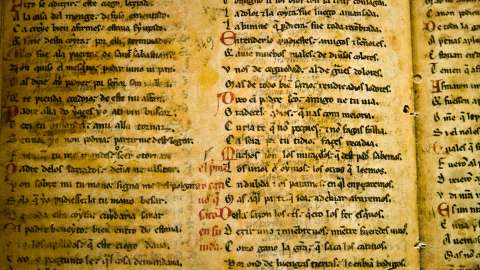 Before booking a place on this course, please contact Dr Jenny Stratford to express your interest.

Preparation
Term 1 focuses on Latin palaeography. Everyone should own a Latin grammar such as B. H. Kennedy, Shorter Latin Primer and C. R. Cheney, Handbook of Dates for Students of British History, new edn. rev. by M. Jones (Cambridge, 2000), and later reprints. Students without any Latin are welcome to apply for the second term.

Dr Jenny Stratford is a Senior Research Fellow, Institute of Historical Research. In her earlier career she was an Assistant Keeper (curator) in the Department of Manuscripts, The British Library. She has published extensively on medieval and modern manuscripts and on princely collections of the later Middle Ages in England and France.

Please note that while this course is administered by the Institute of Historical Research, it is organised through Queen Mary, University of London (QMUL).