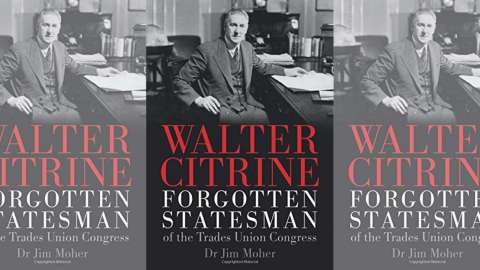 On Wednesday 24th March 2021, the History & Policy Trade Union & Employment Forum celebrated the launch of an important new biography of this former giant of the Labour movement - Walter Citrine: Forgotten Statesman of the Trades Union Congress.

The author, Dr Jim Moher, a former national trade union official and now historian, will be launching it in conjunction with the Institute of Historical Research, University of London and his colleagues in the History and Policy Trade Union & Employment Forum.

Lord John Monks, a distinguished former General Secretary of the TUC (and European TUC), who has a Foreword in the book, will interview Jim about Citrine. This will be followed by questions and a general discussion with full audience participation.

Dr Jim Moher was a national union official (T&GWU and CWU) for much of his career. While still working full-time, in 1989 he presented an original thesis on the history of the early engineering and millwrights' trade combinations, for which he received a London University Ph D. He has been a Visiting Fellow at the Institute of Contemporary British History at Kings College, London since 2008. He was also a founder member of the History & Policy Trade Union Forum, which examines the history of industrial relations and employment to inform current policy development. Jim was, until recently, chair of the Wembley History Society and he lectures frequently on Citrine's Wembley, Harrow and Liverpool connections. With this first complete biography of Walter Citrine, Jim aims to recover the remarkable achievements and public service contributions of an important British and international union and Labour movement figure.

This fascinating biography sets the record straight on a giant of the Labour movement who helped create the modern TUC. It is a wonderful personal story and contains many lessons for us today, not least the need for unity, hard work and organisation. - Frances O' Grady, TUC General Secretary

A lively account and sparkling analysis of the life of an underappreciated great trade union man of the 20th century. At last, Citrine has the biography he deserves.- Lord John Monks, former General Secretary of the TUC